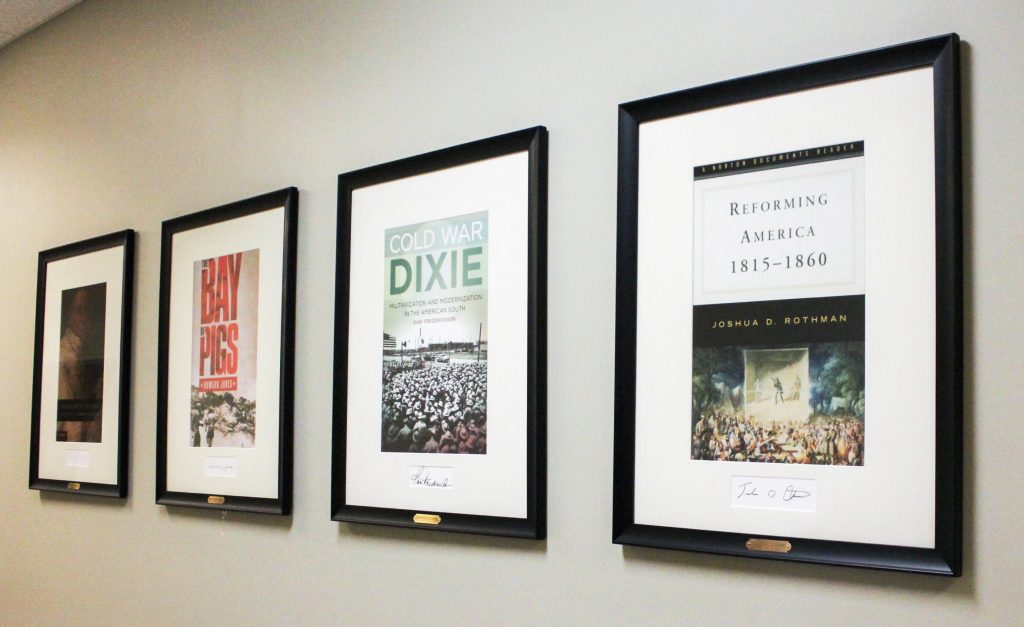 This page provides brief overviews of our faculty members’ research interests. For more detailed information, including lists of publications, browse our directory.

The subfield American politics includes the study of political behavior (e.g. voting, interest groups, campaign finance, and political communication) and political institutions (e.g. Congress, the Presidency, the courts, the bureaucracy, and state executives and legislatures) in the United States.

Professor Nicholas Davis teaches courses on public opinion, political psychology, and political behavior. His research uses experimental and survey data to explore the structure of religious and political belief systems. He is currently working on a book that investigates how Americans conceptualize democracy.

Professor George Hawley’s research interests include religion and politics, public opinion, the conservative movement in America, and right-wing extremism. Professor Hawley employs both qualitative and quantitative research methods, and studies both the broad electorate and political and media elites.

Professor Joseph Smith studies United States courts. Most of his work has focused on the extent to which higher courts influence or control the decisions of lower courts. Professor Smith employs quantitative methods, and has a particular interest in automated content analysis of political texts, including court opinions and briefs, political speech, and campaign communications.

Comparative politics includes the study of domestic politics and political institutions of nations around the world.

Professor Terry Royed’s primary research interest is in the area of comparative public policy, with a focus on the impact of parties and institutions on public policy in advanced industrialized democracies.  Most recently she was involved in a cross-national research project looking at the fulfillment of party manifesto pledges.  She is currently working on a project examining the causes of social and economic policies in Britain and the US from the 1970s until today.

International relations includes the study of how countries interact militarily, economically, and diplomatically, the factors that influence these interactions, and the channels of their interactions.

Professor Waleed Hazbun studies US foreign policy and the international relations with a focus on the politics of insecurity in the Middle East. His work draws on approaches from critical security studies and critical geopolitics and perspectives from the global south. He also writes about the politics of tourism and global aviation.

Professor Elif Kalaycioglu research focuses on how plurality and diversity challenge and transform the world order and global governance. She investigates this question through a substantive focus on global cultural politics, and the case of UNESCO’s world heritage regime. She is also interested more broadly in the role that values, ideas, and expertise play in the conduct of global politics. Her research employs qualitative methods, including textual analysis, archival research and elite interviews.

Professor Daniel Levine has broad interests in International Relations, political philosophy and theory, and Middle Eastern politics.  His research agenda works along two distinct lines of thought. The first draws on Frankfurt School social theory and on the history and philosophy of social science to interrogate the interactions between academic scholarship and public policy.  His key concerns in this area are normative: the responsibilities and obligations incumbent on scholars whose work intersects with war and deadly violence. The second area focuses on fear: both the direct experience of it, and its ‘afterlife’ – in history and public memory, in the workings of political institutions, and in policy discourses and doctrines. He is currently focusing on the early years of the Israel-Palestine conflict, with emphasis on Jewish/Zionist political and strategic thought in the decades between the First World War and the War of 1948-49.

Professor Seungbin Park specializes in international relations with an emphasis on the political economy of foreign direct investment, international migration and gender equality, and attitudes about economic globalization. Her research examines the following: FDI flows (including ethnic investment), remittances, diaspora engagement, trade agreements with gender provisions, and individual attitudes toward immigration, investment, and trade. She employs quantitative methods, including surveys and survey experiments.

Political theory is the study of the concepts and principles that people use to describe, explain, justify, and evaluate political norms, practices, actions, and institutions.

Professor Ted Miller researches early modern political thought. He has focused on Thomas Hobbes, but is expanding his work into the topic of sovereignty. He is especially interested in sovereigns who test their powers, and the law, with acts of mercy, pardons, grace, favor, dispensations, and the political and popular authors who either defend or decry such acts. Related authors of interest include Seneca, William Davenant, Leibniz, and Jules Michelet.

Professor James “Gerard” Caillier is interested in finding out which motivational practices improve the performance of employees in government agencies. He is also interested in understanding which factors influence the performance citizens assign to agencies. Psychometrics (e.g., structural equation modelling), fixed-effects, and survey experiments are some of the techniques used by Dr. Caillier in his research.

Professor Alessandro Del Ponte studies how citizens and governments respond to global crises, including climate change, economic downturns, and migration. A second line of research builds on social identity theory to study the political consequences of national identity and partisan polarization in the United States and the European Union. Professor Del Ponte has a particular interest in experimental design and methods for causal inference, such as economic games and survey experiments.

Professor Richard Fording’s primary teaching and research interests include public policy, race and politics, state politics, social movements, and quantitative methodology. In recent years Professor Fording has focused on the relationship between racial attitudes in American politics and their effects on U.S. elections, protest movements, and the design and implementation of various dimensions of U.S. social policy.

Professor Sungho Park is interested in examining how to improve state and local budgetary outcomes, financial accountability, and fiscal health, in the context of fiscal federalism. His research has a particular focus on understanding the budgetary consequences of different fiscal rules and institutions at the state and local levels, including tax and expenditure limitations, balanced-budget requirements, debt limitations, home-rule charters, and form of government. Government accounting practices and budget reforms, which primarily shape the quantity and quality of information in the public budget process, are also subject to Dr. Park’s research.

Professor Dana Patton’s broad research interests lie at the intersection of health policy, politics, and gender. Recent publications include research on the effect of State Offices of Minority Health on Black infant death rates, the effect of job-protected parental leave policies in OECD countries on infant mortality rates, the effect of women’s representation in state legislatures on premature mortality, and gender bias during oral arguments at the US Supreme Court.