University of Alabama Political Science faculty member Richard Fording received the Herbert Simon Book Award from the Public Administration Section of the American Political Science Association. The award, which was presented at the APSA’s annual meeting on September 5th in San Francisco, is given for “significant contributions to public administration scholarship.” Books with publication dates of 2009, 2010, and 2011 were eligible for the 2015 award. Fording received the award, along with his coauthors Joe Soss (University of Minnesota) and Sanford Schram (Hunter College, CUNY), for their book Disciplining the Poor: Neoliberal Paternalism and the Persistent Power of Race (University of Chicago Press, 2011). The book has previously won the Michael Harrington Award from the APSA, and the Oliver Cox Cromwell Award from the American Sociological Association. 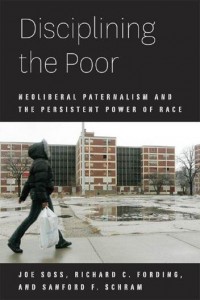